Scattered throughout the state, on pristine sites of woods and water, there are more than handful of Maine summer camps that were established more than 100 years ago. Many of them have been owned by the same families for generations, passed on in transitions that have demanded a delicate balance of maintaining decades-old traditions while adapting to an ever-changing culture. 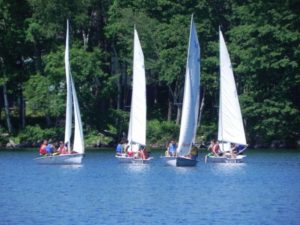 Camp Timanous is celebrating 100 Years. On the shores of Panther Pond, in Raymond, Camp Timanous is a boys’ camp founded in 1917. Director Dave Suitor is a second-generation owner whose parents purchased the camp in 1942 from the Gulick family, a legend in Maine youth camping.

Luther Halsey Gulick’s work with camps began in the late 19th century. In 1907 Gulick and his wife, Charlotte, founded Camp Wohelo, on Sebago Lake in Raymond and in 1917, the boys camp – Camp Timanous – moved to a separate site on Sebago Lake. It moved to its current location in 1920. Suitor, who today runs the camp with his wife, Linda, says Timanous has endured by promoting a simple lifestyle and yet adapting to 21st century realities.

But many of the camp’s values transcend the passing of time: communication, collaboration, and a culture of good behavior.

“It’s cool to be a good guy. It’s not cool to be a jerk,” Suitor says. “It’s all about the people who go here. The type of family and camper that we get is looking for what we have. That’s why there are so many second-generation campers.”

In fact, more than 50 percent of campers are second generation, Suitor says, and the entire counseling staff also attended as campers. “It obviously reflects the power of the place.”

Suitor also says the camp helps foster success for any boy, “artistic or athletic, fast or slow, quiet or boisterous, without the pressures of teasing or bullying.”

“We don’t tolerate any kind of things that make kids unhappy,” he says. “We’re not perfect at it, but we try hard.”

The camp also has a diverse population, both geographically and economically. A scholarship program makes the camp accessible to many boys, Suitor says.

Suitor says continuity of staff is the most important element to Timanous’s success.  The entire counseling staff from the 2016 season is returning this coming summer, he says.  And the traditions of camp, passing from generation to generation, “have become more relevant today than maybe ever before.” 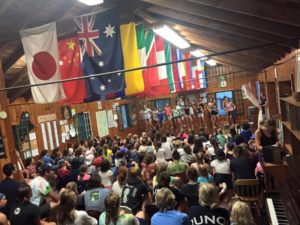 Like Camp Wohelo, Camp Runoia, in Belgrade Lakes, was established in 1907. Its director, Pam Cobb, expresses the same sentiment as Suitor.

“We probably need camp more than ever,” she says. The staying power of camp – which Cobb says exists in a “timeless bubble” – comes in part from families valuing “the opportunity to go to a place different from home, out of the city, out into nature.” Today, camp means being “unplugged” from technology. Fostering the consistency of a camp experience over decades is key, Cobb says.

“It’s mostly the same,” Cobb acknowledges: water sports like swimming and canoeing; land sports like archery and tennis. Horseback riding. Arts and crafts. And, of course, camping trips, which Cobb says were equally popular at the camp a century ago.

Girls then traveled deep into Maine’s woods by horseback, Cobb says. They canoed across the lake for overnight excursions. “They were very, very adventurous.”

Some elements have changed. Cabins now have attached bathroom facilities, for example, and girls now have activities like a ropes course and stained glass, Cobb says. The camp focuses more attention on food preparation and meal offerings, too, she says.

“But it’s a pretty timeless place.” There is reading aloud in the evening in every cabin. Girls still log their adventures with pen and paper.

And all the camp’s activities, whether a century old or brand-new, help develop the skills girls will need, Cobb says. Employers seek individuals who can collaborate, communicate, and “take a hit when they are down,” she says. “Those are great skills. To learn them at age nine is a pretty special thing to have.” 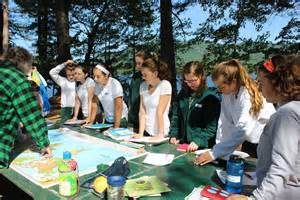 In Denmark, on Moose Pond, Wyonegonic Camps stand out as the oldest girls’ camp in the country. Established in 1902, the camp serves almost 200 girls in three and a half and seven-week sessions of traditional camp offerings. Co-director Steve Sudduth, who manages the camp, says “good fortune and timing” are partly responsible for the camp’s longevity.

First established by the Cobb family, the camp was purchased in the 1960s by Carol and George Sudduth.  After George died in the early 1990’s, Carol and their children –Steve and his siblings, Susie and Dave – continued to operate the camp. Steve says one key to the camp’s 115-year history is “actively managing the alumnae base.”

“In that process, you have to walk the line of maintaining the tradition and integrity of the longstanding uniqueness of camp,” Steve says. “You need to figure out how to maintain your integrity, and at the same time identify where and when to adapt to the changing requirements and demands of our culture.”

Families are looking for a “rustic, in-the-woods experience,” Steve says. “If you are true to your mission, true to what you do, you’ll find the correct people to populate your camp.”

Steve says the camp, whose cabins do not have electricity or on-premises plumbing, offers an experience that truly can “take you back 100 years.” At the same time, “if you do it carefully and correctly, you can adjust to the demands of today.”

Some of those demands are “often logical, often safety-oriented,” he says. There are also regulatory pressures that can present programming issues, he says.

Camps in Maine also stand the test of time by supporting one another, Steve says. “We are unique to each other,” he says. “We literally ask each other’s opinion and help.”

Founded in 1902 on an island on Great Pond, the largest of the Belgrade Lakes, Pine Island Camp serves a smaller group than most camps – under 100 boys –in its single six-week session. Emily Swan, the camp’s business manager and wife of Director Ben Swan, says the camp’s long success is based on striving to continually achieve the camp’s core values.

“I was thinking about our top award at the end of the summer,” Emily says. Called “The Loyalty Award,” it is awarded to the camper who best exemplifies the following traits: honesty, good humor, responsibility, cooperation, independence coupled with concern for others, and a generous spirit. Emily says that strong leadership, and striving to instill those qualities in campers, helps explain the camp’s longevity.

“When people come to Pine Island after being away for a long time, they say it looks just the same,” she says. “In many ways, it is just the same. Almost the same activities, and we have no motorized boating, and we still send out a lot of trips. But if you look up close, it has changed a lot.”

Trips have changed “enormously,” she says, with more attention paid to safety, predictability and planning, for example. The staff includes many women in a variety of roles, unlike decades ago.

“Our core values remain the same, but we are not afraid to change in ways that make us more relevant and more appropriate for the time,” she says.

Change can come particularly with a shift in leadership. Emily cites the example of now allowing the boys who serve as waiters at breakfast to go to the head of the line for activity sign-ups following the meal. The change, instituted by Ben, now creates an incentive for waiting on the table, rather than creating a negative outcome for the boy, who used to land at the end of the sign-up line, she says.

Changes in leadership offer an opportunity, Emily says, “to look and say ‘why do we do things this way?’”

“As long as you make yourself examine what you do, you can take an old institution and keep it modern and relevant,” she says.

Camps in Maine are unique, and camp administrators are fond of saying there’s a camp for everyone. Camps that have eclipsed the 100-year mark have done so through times of both smooth and not-so-smooth political, social, and economic times. Yet they have continued to strive to fulfill their own missions, acknowledging that they are not a match for every child – but they have filled a niche for thousands and thousands of campers over many generations. By honoring their traditions, yet still looking outward, these camps have positioned themselves for boys and girls well into the 21st century and beyond.