Being Unplugged at Camp – Life Without Technology

No Facebook. No Twitter. No email. No technology at all. For many kids who attend summer camp in Maine, cell phones and other devices are not part of the picture. That, according to Matt Pines, director of Maine Teen Camp in Porter, is a game-changer. Pines, whose co-ed camp caters strictly to teenagers, cites a number of benefits to getting away from screens. Benefits that carry over to non-camp life.

The first, he says, is sleep. Kids who get away from the artificial light of their phones and computers before bedtime fall back into a natural sleep cycle, Pines says. The result can be nine hours of sleep instead of six. “Getting consistent sleep is a massive health benefit,” Pines says. 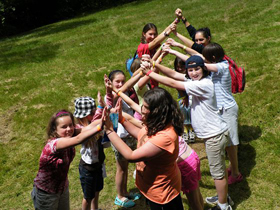 But being unplugged has more than physiological perks. There is a “sense of urgency” created by phone access that introduces a level of stress “that just isn’t good for anyone,” Pines says. Kids with continual smartphone contact frequently wonder what they might be missing, and “have the constant feeling that someone needs you.” Being at camp, away from technology, interrupts that sense.

Pines also points to the fact that the absence of a phone creates space for kids – space to daydream, as well as space in conversations. A lull, without a phone to look at, teaches youngsters how to navigate interaction, Pines says. Downtime, without a phone, also teaches teenagers “how to be with their self,” he says. That time, used for simply thinking, “can spark creativity.”

Finally, Pines says that by putting away phones and eliminating access to the internet, campers are far more likely to take risks and consider consequences of their actions. “Being ‘social media-free’ means there’s no forum for judging,” he says.

“There’s a real consequence to making fun of someone to their face,” Pines says. “We are teaching, or re-teaching, interaction on a human level.” And without Facebook or Instagram or other vehicles for judging each other, campers become more daring. “If they screw up, they fail among friends,” Pines says. This combats the tendency of kids to resist trying new activities, he says.

Putting away the phone is an adjustment, to be sure, but it’s a happy reality at most traditional summer camps, says Catriona Sangster, director of Camp Wawenock in Raymond and president of Maine Summer Camps.