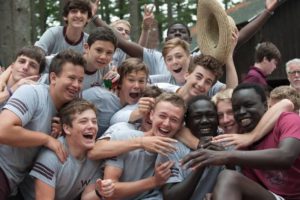 Maine camps host thousands of kids each summer. But camp isn’t cheap. Tuition at some camps hovers around $10,000 for a full session. Yet the benefits of camp extend to kids from all backgrounds. That’s why a number of camps offer special sessions for economically disadvantaged youngsters, giving them a chance to experience traditional camp activities. The mission of these programs, however, is much more. These camps want to change lives.

One such program began nearly 50 years ago at Camp Walden in Denmark. Founded by Camp Walden owner Helen Herz Cohen in 1968, The Main Idea is still held in partnership with Camp Walden and brings together economically disadvantaged girls from New York and New England for 10 days of camp programming at the Denmark camp. Working with 12 social service agencies, the program reaches “girls who need a break from their home life and that would benefit from a camp experience,” says Director Dawn Plourde. The approximately 150 girls who attend each summer include about 25 girls from Maine, Plourde says.

Plourde says The Main Idea focuses on campers’ “personal growth, and owning their own awesomeness.”

“They don’t get a lot of acknowledgment in their own lives,” she says.

Girls return to The Main Idea year after year, Plourde says. Between the ages of 8 and 12, girls have a traditional camp experience, she says. At age 13, they enter a leadership program. Many end up becoming junior staff members, she says.

“The greatest benefit is their gaining confidence and a sense of what they can accomplish in life,” Plourde says. A study the camp conducted last year affirmed that knowledge, she says.

“The message we got from girls was that the relationships they made with staff members and each other helped them understand and recognize they had value,” Plourde says. “They have everything it takes to succeed in life.”

“There’s a massive sense of accomplishment, especially for the inner city girls,”she says.  “They come away with a stronger sense of their own self.”

In 1971, just three years after the Camp Walden program’s founding, Camp Agawam in Raymond took up the same cause. Giving its program the same name, Camp Agawam’s owner began the camp’s one-week, tuition-free, program for Maine boys. Every June, The Main Idea at Camp Agawam brings together about 100 boys aged nine to 15 for a week of traditional camp activities. When Camp Agawam was purchased by its alumni and became a non-profit camp in 1986, The Main Idea continued.

Camp Agawam Director Erik Calhoun, who also directs The Main Idea at Camp Agawam, says the program for the past two decades has served economically disadvantaged boys “who deserve” a camp experience.  Working with school personnel and community agencies, Calhoun says the camp rewards boys “who are making good decisions and are good community members.”

Most boys return to the camp year after year, Calhoun says. At age 15, boys leave the Raymond camp for a five-day canoeing trip on the Rangeley Lakes. Each year a few boys from The Main Idea are also offered a space at Camp Agawam’s seven-week camp program, Calhoun says.

Calhoun says Camp Agawam’s character-building ethic is “embedded” in The Main Idea week. Sitting around a campfire, Calhoun says, boys hear the message that they deserved their invitations to camp. They also hear that they are expected “to treat people the way they treat you,” Calhoun says.

“We don’t push the fact that it is free for the boys, but they get it.”

And for some of the boys who attend, the opportunity extends to becoming both The Main Idea staff members, as well as Camp Agawam full-summer staff members, he says.

In Sebago, at Camp O-AT-KA, boys from Maine get a similar opportunity. For the past twenty years, the camp has offered Dennen Week for about 125 Maine boys each August.

Tong says Dennen Week is intended to give boys a camp experience, as well as to expose them to a diverse population of campers. Campers come from both rural and urban Maine, and are from a variety of racial and ethnic backgrounds.

“Some boys have lived in Sebago their whole lives,” Tong says. Others are first-generation American or have located to the state from other countries. Dennen Week can be a “completely different cultural experience” for all its campers, Tong says.

“In many cases, it’s their first immersion outside a tighter community,” Tong says. “Boys get to see that there are a lot of different faces to Maine.”

In addition to giving Dennen Week campers a traditional camp opportunity, Camp O-AT-KA selects as many as two dozen previous Dennen Week enrollees  each summer to receive “camperships” to attend O-AT-KA’s traditional camp program. Some of those campers have gone on to become staff members at O-AT-KA, Tong says.

In addition, the camp conducts a Dennen Week Counselor-In-Training program among senior campers attending Camp O-AT-KA, enabling them to be CITs during Dennen Week.

Tong says there are “more boys than we can take” for each Dennen Week session. The camp seeks to find an even distribution throughout a range of communities. It also creates a waiting list. The program has gained a reputation throughout Maine, Tong says.

The boys develop “a sense of independence and a feeling that they have accomplished something,” he says.

More than 300 girls from Maine and beyond achieve that same feeling by attending The Summer Camp in Washington, Maine.  Four, 10-day sessions of tuition-free camp each summer offer a diverse camper environment for girls from New York and New England. Girls “from all over the state” meet other campers fromurban settings to enjoy traditional camp activities, says Development Manager Jessy Richardson.

“We are hoping to be able to give them a better outlook on their personal life and the things they can accomplish in their lives,” Richardson says.  “Just because of their history doesn’t mean they are destined to be what they know and are accustomed to.”

As The Summer Camp campers progress in age, their camp experience is enriched by speakers, college preparatory information, and other program offerings to help them reach their potential, Richardson says.  And regardless of age, campers are exposed to role models in the camp staff, she says. Staff comes from diverse backgrounds, with “all different races, beliefs and ideas,” she says. Staff financial backgrounds also vary, Richardson says.

Campers who attend these programs often see a Maine to which they have never been exposed.  Kyle Tong tells the story of a Dennen Week camper from the town of Sebago who asked if Sebago Lake was the ocean. First-generation Americans from the city meet youngsters from tiny, rural towns. Campers swim and hike and sit by fires and learn from compassionate and enthusiastic staff that they are full of potential and ability. They gain independence and the satisfaction of being away from home, perhaps for the first time. Camp benefits all kids, to be sure. But perhaps when the opportunity reaches youngsters who might never have had the chance, there is even greater meaning.