Last Monday brought a perfect Maine summer evening. It was still warm, and as the sun set over the western shore of Lake Sebago, a group of girls who had spent the past seven weeks together sat together around a campfire getting ready to say Goodbye. 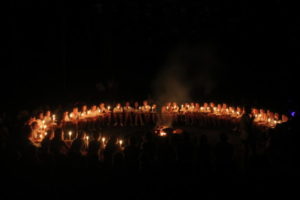 Camp’s Ending Is Nothing If Not Bittersweet at Wawenock

The final night of camp at girls’ Camp Wawenock, in Raymond, was about connection and friendship. Director Andy Sangster began the event with a traditional camp prayer, campers sang a variety of songs, and director Catriona Sangster delivered a reading. Then each and every girl stood to give a friendship gift to another camper. Handmade gifts of all shapes and sizes were passed from friend to friend. There were hugs and squeals and cheers. Then, quietly and by age group, the girls made their way to the waterfront, stopping at a table to pick up a small boat-shaped piece of wood bearing a single lit candle. In the small cove before them, the girls launched their boats into Sebago’s waters and said good-bye. From a vantage point a few hundred yards away, I could hear laughter and sobs. Camp’s ending is nothing if not bittersweet.

Camps across Maine are ending their seasons. It has been a banner summer, directors say, with good weather and lots accomplished.  And like Camp Wawenock, camps cap their final days with celebration and ceremony intended to seal those memories of a summer well spent.

At Camp Wawenock, camp opens each June with a friendship fire, says Catriona Sangster. Campers exchange hand-decorated pins with a camper in their age group as a way to kick off the summer. Then, at season’s end, the friendship gifts cap off a summer of connection and community.

Campers also sometimes make a wish as they send their boats into the water, Sangster says.

At Fernwood Cove, a girls’ camp in Harrison, Associate Director Caroline Glovsky says a banquet, awards, and songs “become not only a bonding point, but a ‘we are larger than ourselves’ point.”

Campers are also given awards, Glovsky says, including a “Neatness Moose,” for tidy living, awards symbolizing the random acts of kindness displayed throughout the summer, and prizes for living the values of Fernwood Cove.

One ritual at Fernwood Cove is the passing of a signed board from departing senior campers to their successor campers. “They’re passing on their roles and responsibilities,” Glovsky says. On the same final night, seniors are honored with a song from younger campers.  Like Camp Wawenock, candles are floated onto the waters of Island Pond.

The final event of the evening is a fireworks display, Glovsky says. “We don’t want them to go to bed sad,” she says.

At Camp Nashoba North, a co-ed camp in Raymond, director and owner Sarah Seaward this week was preparing for the top-secret end-of-the-season banquet. An event two months in the planning, the banquet transforms the dining hall, Seaward says. Past banquets have included Monopoly, All Things Maine, and Harry Potter.

The end of the season marks a time for reflection, Seaward says.  Campers who have returned for their fourth summer receive a laser-engraved Maine-made Shaw & Tenney paddle. Eight-year campers earn a jacket. All campers have memory plaques with the names of the cabins and a record of their achievements.

We want to give them reflective time,” Seaward says.

Marcy Isdaner, director and owner of girls’ Camp Mataponi, in Naples, says the seven-week session this summer was “excellent.”

The last few days are really bittersweet,” Isdaner says. Those days include “Jamboree,” four days of “spirited” competition in all aspects of camp.”

“It brings everybody back together,” Isdaner says, after being divided by age groups for activities during the season.

“The culminating competition of Jamboree is the “rope burn,” Isdaner says.

Senior campers, wearing flannel shirts that have been passed down from camper to camper each summer, walk to the dock, holding hands, and jump into the water.  They then process, with the rest of the campers behind them, to two bonfire areas where ropes soaked in water hang eleven feet above the ground. The goal? To build a bonfire and burn the rope in half. Whichever team burns the rope first earns the most Jamboree points.
There is, of course, song as well.

“Most campers return year after year, Isdaner says. For the seniors, many of whom have come to camp for eight or nine summers, the end of the camp is a time to realize that they are moving on, but that it’s a chapter “not to be sad about.”

Isdaner says one goal of the end-of-the-season events is to make girls think “oh my gosh, I’ve got to come back” next summer.

Campers Across Maine Will Carry Memories of New Friends and Old 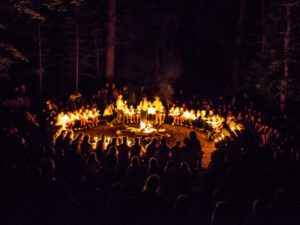 At Camp Wawenock, girls hugged in the evening dark. Their seven weeks together had come to an end; morning would bring a trip back home. They would carry memories of new friends and old, skills improved, the benefits of living for nearly two months without technology. As their candle-lit boats bobbed in the water a few feet away, the Wawenock camp family had gathered one final time. And for campers across Maine these past weeks, the same was happening. The season is ending. But as Fernwood Cove’s Caroline Glovsky put it, “Just because you are leaving camp, camp isn’t leaving you.”