Thousands of youngsters attended camp in Maine this summer. They traveled from next door and from regions in far-off lands. They swam, sailed, played sports, made art and music, and made friendships that for many will last a lifetime.  Directors from three of those camps say it was a summer of fun and of growth. One of those camps held its very first session; another has operated for almost 100 years. Yet what these camps share with the scores of others around the state are the connections kids make. 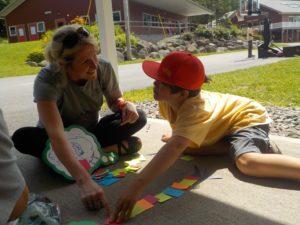 Camp Alsing: Offering an Opportunity for Youngsters with Social Challenges

Camp Alsing held its inaugural session this summer. For two weeks, on the shores of a pond in Rome, ME, 25 boys and girls aged nine to 16 got the chance to work on social skills and just be kids at the same time. The camp serves children who need help navigating relationships. Some of those campers have Social Communication Disorder, Asperger’s Syndrome or High-Functioning Autism. Others have challenges that don’t fit a specific label. But Camp Alsing Director Emily Chaleff says the kids who attended camp this summer had one thing in common: an “inspiring” experience.

“Parents could really see the change in their child, in terms of how comfortable they were with themselves,” Chaleff said. One couple, from Cape Cod, said they had never heard their two children talk so much as they did on the five-hour return trip home, Chaleff said.

A particularly successful aspect of the two-week camp was the fact that kids went tech-free, Chaleff says. “We wanted to show the kids they had the capacity to be comfortable and entertain themselves,” she says. “They could find solace in other activities.”

“They just really adapted beautifully to the program, Chaleff said.

That program included all kinds of traditional camp activities: swimming, kayaking, camp fires. And because this was the camp’s first session, staff worked with campers to build traditions, Chaleff said.
“It made them feel really valued,” she said.

Chaleff says two separate performance opportunities gave campers a chance to come out of their shells. In one such performance, campers used puppets behind a lit screen, appealing to kids who might have been reluctant to be on stage. But the last night of camp included a talent show.

“They had such a blast,” Chaleff says. “Kids who barely spoke when I visited their house [prior to camp] were up on stage rapping.”

“It was such an accepting open group. I think that’s one of the most powerful things.” 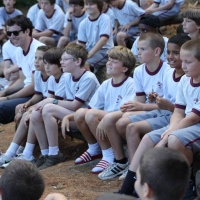 In Raymond, Camp Agawam has operated since 1919. This summer it welcomed about 165 boys.
“We had a great summer,” said Assistant Director Karen Malm. “We had a younger staff overall than other years and they were very energetic. It was great to see them grow so much in their roles as counselors.”
Malm said the camp’s 15-year-olds took on a leadership role that younger campers really appreciated.  A camp highlight is the “Tribute Ceremony” for those older campers. “It’s just the boys and staff, and the tributes are read to each boy individually,” Malm said.

“It’s great to see them grow up over the years.”

But Malm said the new campers at Agawam “did very well.” Unsettled weather at the beginning of the summer – which affected scheduling – gave rise to a little homesickness, “but when the weather changed, it just seemed like everyone settled in.”
“The returning boys were wonderful about welcoming boys who were new,” Malm said.

Malm said the friendships campers form carry far beyond camp. When the camp board of directors gathers each summer, she sees connections that have carried “10, 20, 30 years.” 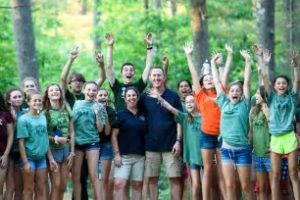 Connections like those Malm describes at Camp Agawam are the highlight of Camp North Star says owner/director Steven Bernstein.

“It was a phenomenal summer,” Bernstein said. “It went by very quickly. Too quickly in fact.”
The formation of strong friendships is “always one of our goals,” Bernstein said. And the “hugs and tears” on the last day of camp demonstrated their success, he said.

Campers refer to Camp North as “their second home,” Bernstein said, and are greeted with a “Welcome Home,” when they arrive.  “It’s part of the family atmosphere that we’re lucky to have,” he said.

Bernstein said the waterfront continued to be one of the most popular areas of camp. “Waterskiing to sailing to windsurfing to canoeing to kayaking,” he said. “And certainly swimming.”

Bernstein said the camp extended its geographical reach this summer, including campers from Thailand and Denmark for the first time. Domestically, Camp North Star included campers from Chicago, Colorado and Texas this summer. “We had tons from other areas, too,” he said.

And the formation of friendships is paramount, he said. “Whether the first day of the session, when we see hugs, or the last day when they say their ‘see you laters,’ our hope is that they always see each other later,” Bernstein said.

Bernstein said another highlight of camp is the “RICHS” ceremony, where campers are honored for respect, independence, caring, honor, and spirit.

“We see just a sincere joy and happiness that our campers have for those who are recognized. It’s something that is really unique in the competitive world these kids live in,” he said. “They are truly happy for their peers when they are recognized.”
The 2017 camp season gave youngsters of all ages a chance to learn new skills, visit new parts of Maine, and put aside technology in favor of face-to-face connections.  Whether it was a seven-year-old experiencing overnight camp for the first time, or a teenager in his or her final season as a camper, kids across the state gathered for fun, friendship, and a chance to gain independence. They may have tackled new ways of relating, like at Camp Alsing, or honored a peer with an award at Camp North Star.  Their summer accomplishments may have been on a mountaintop, in a sailboat, or conquering a ropes course.  They may have mastered a new piece of music or crafted a stained glass creation.  And while kids are home now, back to school and homework and technology, they have the benefits of a camp experience to add to their repertoire. Summer may be over, but the wonders of camp carry on.