Dawn Willard-Robinson is director of Pine Tree Camp, which is operated by the Pine Tree Society, and is the only overnight camp in Maine serving adults and children with intellectual and physical disabilities. Willard-Robinson says the camp “is really a traditional summer camp, just everything is barrier-free.”

That means the adults and kids who attend get a true camp experience. Music, drama, arts and crafts. Boat, swimming, fishing. Even a challenge course. All on a mile-long stretch of North Pond in Rome. With seven six-day sessions, and between 80 and 90 campers per session, the camp – just like any other camp – can make the difference of a lifetime. 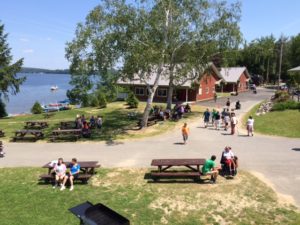 The camp was founded in the 1940s to serve individuals with polio, Willard-Robinson says, but it has evolved. Today, individuals with physical disabilities as well as also campers with intellectual impairments, including autism and Down Syndrome, have a chance to forge new friendships, learn new skills, and enjoy Maine’s natural beauty. No different from any other traditional Maine camp.

And just like other camps, kids who go to Pine Tree Camp have experiences that can be transformational. Willard-Robinson says one profound impact is the development of confidence. “A lot of parents say [their kids] come back way more confident in the home setting, interested in trying new things,” she says.

Pine Tree Camp also gives the youngsters it serves during its three youth-camp sessions a taste of independence, Willard-Robinson says. “A lot of campers haven’t had a chance to do things away from their families,” she says. “It’s their first snippet of freedom.”

For the adults that go to Pine Tree Camp, a week in nature can also a welcome experience. Many adults with intellectual or physical impairments live in urban settings because that is where many services are located, Willard-Robinson says. She describes one woman from Portland – who has been coming to the camp since childhood – who annually retreats to a favorite spot on a nature trail to enjoy the quiet beauty of the camp’s 100 acres.

Willard-Robinson says that for more than 70 years the camp has never turned away a camper based on an inability to pay. Fundraising efforts throughout the year go toward the scholarships that make the experience financially accessible, she says. “Cost doesn’t need to be a barrier,” she says.

Much of the camp’s continued success comes from its highly-trained staff, Willard-Robinson says. “For the past several years we’ve had a very high return rate,” she says. “Once they get there, they’re hooked.”

With a staff to camper ratio of between 1:2 and 1:3, the camp staff includes many individuals training for careers in education or healthcare professions, Wilkerson says. “It helps them get some hands-on experience that’s so important. It’s an easy sell. We get some amazing staff.”

The camp has also made ongoing improvements to its physical plant. There have been dining hall and cabin renovations, and the camp now boasts a new accessible kayak dock, enabling easier transfer from wheelchair to kayak and back again. Campers who may never envisioned it, therefore, have the chance to paddle through a beautiful Maine body of water – just as campers without physical disabilities do at camps all over the state.

Willard-Robinson says campers are grouped thoughtfully, according to age level, but with a “mix of disabilities.” The acceptance of one another within those groups helps create strong friendships that “enhance that social experience,” she says.

The camp is also increasing its off-season programming. Buildings can be used year-round, and the camp hosts a range of non-profit groups with similar missions both in the spring and into late fall. In addition, it offers a small summer day camp that allows campers to “come and try it out,” she says.

“I wish we had more time for more programming for adults,” Willard-Robinson says. Adult sessions for the 2017 season are full, but there is still room in youth sessions.

After all, it’s a place where campers aren’t limited by their intellectual or physical challenges. A week in the sun, on the water, even in the state’s only accessible treehouse. The camp is needed. For more than 70 years, Pine Tree Camp has been meeting that need.