Next week, 70 youngsters attending camp in Maine will travel to the Stephen Phillips Memorial Preserve in Oquossoc, near Rangeley, for a five-day experience that could mark an accomplishment for a lifetime.

Their destination? Junior Maine Guide Test Camp, where they will take more than 20 practical and written tests. Their goal? Junior Maine Guide certification, an achievement garnered by about 2700 Maine youth since the program’s inception in the late 1930s by an act of the Maine State Legislature.

The JMG Program is a joint effort of the Maine Department of Inland Fisheries & Wildlife and Maine Summer Camps, a membership organization of more than 120 Maine camps that supports camps, their programs and staff, and the multi-million dollar camping industry in the state. The JMG program teaches a broad range of outdoor living skills to youngsters attending camp in Maine, an effort culminating in the Test Camp held each July.

In preparation for Test Camp 2017, candidates and their counselors recently gathered for a JMG “Rendezvous” at the Bryant Pond 4-H Camp and Learning Center in Bryant Pond. The day-long program brought together candidates from eight Maine camps and about ten JMG instructors – who demonstrated skills ranging from topographic map reading and axemanship, to canoeing and setting up shelters and fireplaces.

The day gave dozens of JMG candidates an opportunity to ask questions and observe instructors perform tasks on which youngsters will be tested. 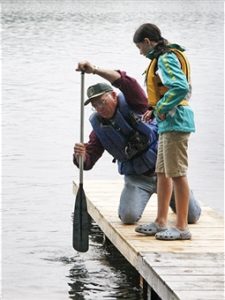 At the canoeing station, on the shores of Bryant Pond, longtime instructors Marie Keane and Ginny Geyer sat with students at picnic tables and offered insights into the canoeing test, one of the 11 major tests administered at Test Camp. The group then gathered on the dock while Keane and Geyer queried them about different parts of the canoe.

The answers came as quickly as Geyer could ask them.

“Is there a painter?” Geyer asked, referring to lines attached to either end of the canoe.
“No,” the group answered in unison.

Satisfied with the group’s answers, Geyer and Keane then launched the canoe from its dock-top perch and into Bryant Pond. The two instructors then climbed aboard – reminding campers to have three points of contact.

What followed were stroke demonstrations and more pointers, all geared to help equip candidates with knowledge both about canoeing, and about what next week’s Test Camp assessment will involve. 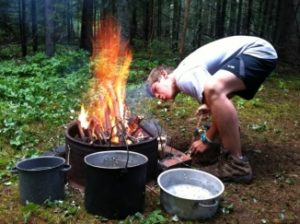 Meanwhile, in woods less than 50 yards away, instructors Bill Southwick and Lindley Brainard worked with small groups discussing shelter and fireplace. Armed with tarps and ropes, the groups discussed the best location for shelters, where and how to build fireplaces, and what pitfalls to avoid.

Across the road, instructors gathered candidates in several groups to discuss axemanship and topographic maps. Again, the focus was on providing guidance and answering questions.

John Curtis Has Been With JMG Since 1977

Most of the 15 counselors in attendance were certified JMGs, Curtis says, but because it was their first year teaching the program, they appreciated information and teaching tips.

“They had a chance to sit down with me one-on-one so they get some individual attention in addressing their concerns,” Curtis says.

“Coming from New Jersey, I’ve never done anything like this before,” said a candidate and counselor-in-training Zipporah Hommel, from Camp Runoia in Belgrade. “So even if I don’t pass, or get to where I want to be, it’s still a great experience.”

“I’ll be looking back on it, happy and confident in what I do.”

Eliza Quinones, of Bangor, has been attending Camp Runoia for eight years. Like Hommel, she is a counselor-in-training and will attend JMG Test Camp for the first time.

“I was a little rocky at the beginning, but then we went on a camping trip and I loved the stuff that we did.”

When candidates gather in Oquossoc next week they will be armed with everything needed for five days of outdoor living. They will prepare all their own meals – boiling, baking, and frying included – and be tested by instructors on what they create. They will demonstrate canoe skills, build “wet-day” fires, and be asked to identify tree and wildlife species. Between the 11 major and 10 minor tests, candidates will have the opportunity to demonstrate outdoor living skills not unlike those boasted by Maine’s esteemed Maine Guides. It’s a challenging week, with a pass-rate for first-time candidates standing at about the 50 percent mark. And instructors agree, regardless of whether a candidate attains certification, the skills learned and the Test Camp experience foster independence and build confidence. JMG Test Camp can be life-changing, and next week, another class of youngsters will embark on the adventure.