Just like parents back home, residential camps face the challenge of how to best feed their kids. Healthy food is key, but so is making sure campers actually eat. And just like home, not every meal appeals to every child. So how do camps do it? A handful of camp directors described their approach – plus shared some camper favorites at mealtime.

Steven and Brooke Bernstein own and direct Poland Spring’s Camp North Star.  For the 150 kids served by the co-ed camp, Steven Bernstein says they seek a balance of “healthy food that’s also kid-friendly.” That means eliminating fatty and processed foods. It means grilling and baking. No soda, no candy, no drinks with high fructose corn syrup.

“Luckily for us, kids are used to eating healthy foods,” he says.

“We want to give campers a lot of knowledge about what’s healthy and what’s less healthy.”

Bernstein says he and the camp’s head chef set the camp menu. Mondays are cookout night, Tuesdays are taco night. Main entrees include chicken, turkey, pasta, beef; pasta is an option at every lunch and dinner, Bernstein says. So is the salad bar. And kids always have a vegetarian option.

And on the last night of each session, campers get a special treat, the chance to choose what they eat: steak, chicken marsala, grilled salmon or a vegetarian option.

Kids who get hungry during the day also have options. Bowls of fresh fruit are available throughout the day, Bernstein says.  The camp also serves an afternoon snack each day.

“They’re active,” Bernstein says. “They need to be well-fed.”

“We don’t pretend to be gourmet,” he says. But it’s healthy, hearty food that kids like, he says. That means a full salad bar, a side table with an alternative meal option if the main course doesn’t appeal.  The camp serves a variety of ethnic foods as well as a traditional favorite: Thanksgiving dinner.

Another favorite is “Egg McWest End,” says Lepler. Friday night is pizza night. “They look forward to that,” Lepler says.

And a banquet at the end of each session means a buffet, including chicken parmesan, baked ham, and fettucine alfredo.

“We try to give what kids like, with a healthy bent,” Lepler says. “We feel good about what we do; we’re proud of what we are.”

At Hidden Valley Camp, a co-ed camp in Freedom, Peter Kassen serves as director with his wife, Meg. Kassen says the camp seeks to offer a variety of fresh and natural food, “with as much prepped at camp as possible.” And campers are encouraged to try new foods, like Indian and Jamaican offerings sometimes presented.

“I have had parents tell me their kids said the camp food is better than at home,” Kassen says. Of course, cooking on an institutional scale – the camp serves 250 kids per session – enables more variety than home, he adds.

The camp offers a “huge salad bar,” he says, makes its own granola, and prepares free-range eggs. Afternoon snacks include popcorn and granola bars, plus natural soda or seltzer water.

“It’s fresh and wholesome,” Kassen says. “Kids get accustomed to it.”

Among the favorite meals? Pizza night ranks among them, Kassen says. But he says the real pleasure comes simply from eating in community, “sharing a good meal with friends.”

Camp Wawenock in Raymond Offers Plenty of Choices, A Chance To Experiment, And Some Old Stand-Bys

In Raymond, at girls’ Camp Wawenock, director Catriona Sangster says feeding campers requires a balance between offering healthy food and “wanting to make sure they are eating.”

But the art of nourishing campers has evolved, she says. “Years ago, a lot of what we were serving was ‘pre-fab,’” she says. “We’ve gone to much more scratch cooking,” she says. “It’s a healthier thing for kids.”

Girls still have some preferences, though. “When I tried to take chicken patties off the menu I almost had a revolt on my hands,” Sangster laughs. So the occasional chicken patty or chicken nugget still appears on the camp menu. 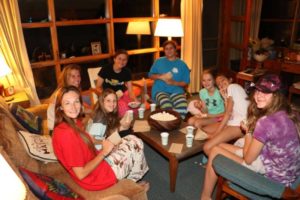 “We know that in seven weeks we’re not going to change habits instilled at home,” she says. “But we have an opportunity in an environment where there is a lot of peer influence and role modeling with staff.”

Sangster says Camp Wawenock takes advantage of local produce from Raymond’s Mulberry Farms, which means a greater variety of vegetable offerings. The camp also has something called “No, thank you helpings,” small servings of foods girls are encouraged to try even if they are reluctant. There are also standard favorite foods, including macaroni and cheese, lasagna, and, like West End House Camp, Thanksgiving dinner.

Camp is a high-activity environment, and camp directors know they have to nourish kids with healthy and appealing menus.  That can be a balancing act. But with plenty of choices, a chance to experiment, and some old stand-bys like a traditional turkey dinner, kids in camps across Maine this summer have sat in dining halls with friends and staff to enjoy community and carefully prepared meals to fuel their fun.